Kathmandu is the country's capital city and stands out as one of the top attractions in the world. Renowned for its lush history, culture, and architecture, this city lures many domestic and foreign tourists every year.

From architectural wonders, stunning gardens, ancient religious sites to museums and art galleries, this city encompasses everything that makes your holiday memorable, especially with our Kathmandu sightseeing tour packages. Kathmandu presents a plenty number of choices to keep you busy throughout the day.

Whether you are on an educational tour or family vacation, taking an official tour, or simply spending a holiday with friends or partners, the Kathmandu city tour offers you a perfect trip to Nepal.   `

Kathmandu darbar  Square:  is one of three durbar squares located in Kathmandu valley, which are all protected by the UNESCO world heritage site.

Durbar Square houses ancient monuments, museums, view towers, sculptures, bronze art, pagoda, and temples, dating back from the 12th to 18th centuries. The most appealing architectural piece is the 17th century stone inscription carved into the wall of the palace with writings in 15 different languages.

Kathmandu Durbar Square has a museum inside its premises that protects the ancient sculpture, architecture, paintings, and pictures: which vividly portrays the ancient history of Nepal.

The entrance fee to Kathmandu Durbar Square is Rs. 250 for foreign visitors. Once you pay for the entrance, you are permitted to visit each and every part of the building.

Stroll around the chaotic but historical street of Kathmandu, which starts from Rani Pokhari, a large pound at Jamal beside the clock tower. This trip allows you to experience the vibrancy of the ancient streets of the AsanTole and Indra Chowk Bazaars whilst delving into the history and lifestyle of local people. We will explore the market stalls, temple shrines, and hidden courtyards.

A fascinating walk to the historic yet rarely visited part of Kathmandu. This enlightening walk begins at Teku, south of Kathmandu, and heads towards the Wonder Narayan: built-in 17th century dedicated to Lord Vishnu.

First walkthrough HyumatTole before arriving KusahBahi, a Buddhist courtyard built in 1754. Then continue towards Narayan Dewal, another temple dedicated to Vishnu constructed in 1865 with a small Ganesh temple at the entrance. Then continue towards Tukan Baha, which was built in the 14th century and represents the deity of Swayambhunath. Explore the Rama Temple at the RamchandraDewal and walk to JaisiDwal, a large Shiva Temple built-in 1688. Walk down to Kohiti and observe the Buddhist and Hindu sculptures in the water fountain. Next, continue moving through ChikanMugal and halt at Atko Narayan Dewal, the most significant Vishnu Temple built in 1857. A few more minutes of walk will take you to KasthmandapPavillion and BhimsenDewal (1655 AD), the final site of the heritage walk tour.

Swayambhunath, also known as Monkey Temple, is a hilltop stupa nestled on the western edge of the Kathmandu valley. The sleepy, all-seeing Buddha eyes that look out from the top showcases the quintessential symbol of Nepal.

This stupa is one of the revered Buddhist sites in Nepal, and its evolution is connected with the creation of the Kathmandu valley out of a primordial lake. Legends have it that a lotus flower at bloom suddenly appeared in the middle of the ancient RiverRiver. Gradually, it spread throughout the RiverRiver and across the valley. A gigantic illusion of Sakyamuni Buddha appeared on the top of the lotus. And the stupa was built at the very spot after Manjushree drains the water from the valley.

. Swayambhunath is listed as a world heritage site, and the entry ticket fee is NRs. 50 for foreigners and NRs 30 for SAARC citizens.

Budhanilkanthais, the most enigmatic statue of Hindu God Vishnu, is nestled at the base of Shivapuri Hill. This incredible 5m long black statue represents the powerful Hindu deity Vishnu resting on the cosmic sea. The Temple dates back well over 1,000 years to the era of the Lichhavi dynasty that once ruled the Kathmandu valley. It is still unknown that where this statue came from.

Boudhanath is amongst the largest stupas in South Asia and is the most significant religious site for Tibetan Buddhists. This 5th century built stupa houses a pleasant courtyard that contains the TamangGompa and a number of traditional shops displaying singing bowls, thankas, prayer wheels, and much more.

More than 45 stupas are built around the site of Boudhanath, and we can encounter many young monks learning Buddhism.

Pashupatinath is the most sacred Hindu shrine dedicated to Lord Shiva. The Temple is 5km east of the central city and resides along with the Bank of the holy Bagmati River.

Pashupatinath is a two-storied pagoda temple made from copper and is covered with gold. This richly ornamented Temple is further embellished with wooden sculptures carved with fascinating arts. It is believed that whoever pays homage to this Temple makes their wish come true.

New Hindus are prohibited from entering the main Temple, but many other temples are worth exploring. The Temple of Kali, located on the bank of River Bagmati, has an exciting appearance and myth. The statue of Kali is half grounded, and it is believed that if the statue grows out of its original spot, the whole world will come to an end.

A vantage point located immediately on the eastern border of the RiverRiver allows us to witness the entire Temple and ongoing rituals. Likewise, we can observe the cremation process of Hindu bodies on Aryaghat on the western bank of the RiverRiver, just below the Temple.

We can walk up to a small forest Shelshmantak, located on another side of the river River, to witness the animals like Deer and monkeys.

The Temple of Dakshinkali:  is located at the outskirt of Kathmandu valley and is dedicated to Hindu Goddess Kali. It is about 22km south of the city amidst of tranquil forest. This shrine is crowded on Tuesdays and Saturdays when animals are sacrificed to the deity. We stop at Chobhar gorge on the way back, which Lord Manjushree makes to drain out of the lake which once filled the valley.

Patan, located southeast of Kathmandu, houses a dense concentration of ancient palaces, temples, and shrines with beautiful carvings. It is the oldest of all three cities in Kathmandu valley.

The ancient Royal palace is the centre attraction of Patan that includes three central courtyards knowns as Mul Chowk, Sundari Chowk, and Mani Keshab Narayan Chowk. A few minute's walks from the Royal Palace is a Golden Temple, a Buddhist monastery guarded by sacred tortoises that potter around the courtyard. A little further is Kumbeshawar, the oldest Temple in Patan, built in 1392. The enthralling streets crowded with metalsmiths and brass shops are to the south of Square.

There is no entrance fee for "Patan", but you have to pay NRs 1,000 for Durbar Square while only NRs 250 for SAARC Nationals. The entrance other than Patan is the golden Temple (NRS 50) and NRs 50 for Mahavihar and Rudravarna combined.

Like its counterpart Kathmandu Durbar Square, Patan Durbar Square is a fascinating illustration of Nepal's lush history, arts, and cultures. This UNESCO-listed world heritage site used to be a royal seat for the Malla reign (pre-Shah Dynasty), and some many artefacts and sculptures showcase Nepal's bygone era.

At Durbar Square, we can visit a museum housing an assortment of bronze statues and religious objects. The most alluring monument here is a 17th-century temple dedicated to Hindu God Krishna, built entirely of stone.

Iba Bhai is located two minutes walk south of Durbar Square. It is dedicated to Buddhism and depicts the intriguing architecture of the Malla era. A two-step platform takes us to the courtyard with a hall called Dolan. We can see a shrine of Shakyamuni right across the entrance.

Kawa Bahal, also known as the Golden Temple, is a sacred Buddhist monastery built in the 12th century. It is just five-minute walk northwest of Durbar Square. Here we can enjoy the fine wood architecture and ancient sculpture. Moreover, artistic images and paintings are displayed around the courtyards. Entrance Fee NRs 25.

Mahaboudhha is just a few minutes away to the east from the southern edge of Durbar square. Here we can observe the amazing craftsmanship of ancient people, which are well-presented in many buildings. This 14th-century monument is an obelisk-like design and is an incredible example of a cotta artform.

A few meters away from Mahabouddha is Oku Bahal, one of the sacred Buddhist sites in Patan. Oku Bahal houses a stone-paved courtyard and has a two-story building with gilded roofs. The sacred images and other small shrines date back several centuries.

After a Patan City Tour, we can visit a central Zoo located a few minutes away from the main road. It houses about 106 species of birds and over 665 animals, including an Elephant on which we can enjoy a zoo safari. There is also a pond amidst of Zoo where we can boat and get relaxed. Entrance for foreign visitors costs NRs 60 (NRs 25 for children aged below 10) and NRs 100 for Elephant rides.

Bhaktapur is an ancient city and is known for its fascinating art, open museum, culture, colourful festival, traditional dances, and unique lifestyle of the Local Newari Community.

This ancient city is just 12 km east of central Kathmandu and awards you an incredible experience of ancient Nepal through its traditional homes, monuments, and environment.

This medieval city is conch-shaped and spreads its territory over 6.88 sq. kilometer. The town was founded in the 12th century, and Malla used to be the ruler of the area.

Most of the sights in Bhaktapur can be explored by foot and includes yet another Durbar Square, which is relatively larger than its cousin Kathmandu Durbar Square.

We can just take a break from temples and sit back, enjoying the lifestyle of Newari people who have living here for centuries and whose lifestyle has not been changed to date. Watch – the process of drying the grain in the sun, people collecting water, washing clothes in common taps, vendors with open shops, and children playing traditional games. Also, enjoy dyed yarns flapping in the breeze or people making mud pots.

The Durbar Square houses 55 windowed palaces and National Art Gallery, and the entrance is embellished with a medley of temples of various designs. Entrance Fee: NRs 500 for foreign and NRs 30 for SAARC Nationals.

Taumadhi Square is located in the east part of Durbar Square and is just a few minutes away from Durbar Square via a narrow brick-paved lane. Here we can admire the towering five-storied Nayatpol Temple. The stairway leading up to the top of the Temple is lined by stone figures of deities and mythical beasts, each 10 times powerful on consecutive order.

Just a two-minute walk from Durbar square's southern edge will take you to Potter's Square, locally known as Bolachhen. Here we can perceive many potters molding wet clay into different impressive designs. There is Open Square filled with fresh pottery left out to dry in the sun.

SidhhaPukhu is an ancient pond that dates back to Lichhavi Era (Pre-Malla Dynasty). Local calls it Ta-Pukhu, meaning.

Surya Binyakis located in a thick forest to the south of Bhaktapur. Located just a 20-minute walk from the bus terminal, this Temple is dedicated to the Hindu deity Ganesh.

Located 12 km east of Bhaktapur, Changunarayanis a hilltop temple that overlooks the valley. The Temple is dedicated to Hindu God Vishnu and is known for timeless pagoda architecture and magnificent stone carving. This ancient Temple is listed under UNESCO world heritage site.

the capital of Nepal and Historical place

► The tour guide, Salley, and food.

► Lunch & Dinner throughout the trip

► The tour guide, Salley, and food.

► Lunch & Dinner throughout the trip 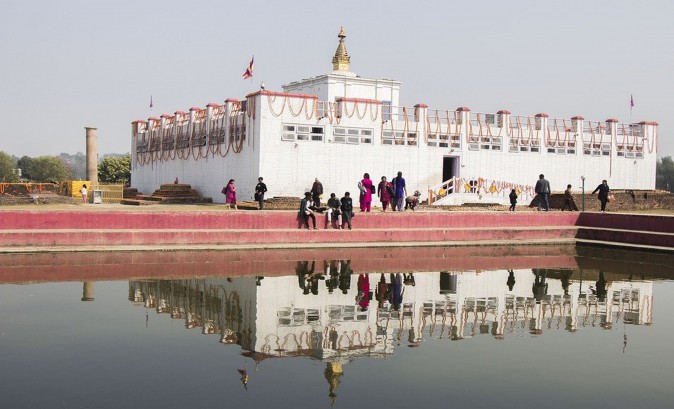